Recently I’ve been trying to lose a bit of weight.

Not a lot, just 10-15 pounds. I’m relatively fit but I’ve packed on a little bit of unwanted fat over the years.

For a few months I did the easy thing. I said to myself ‘Hey, we’re gonna lose weight now,’ then proceeded to do mostly nothing.

I was arrogant enough to believe that because I wanted to lose weight, and because I knew how to eat healthy, that I would actually drop those pounds without effort. That I could just go about my day and make smart food choices that would result in me eating at a low enough deficit to drop weight.

In short, I was an idiot. I actually mentioned how much of a bad idea that is back on this blog, while I was doing it myself. Obviously it didn’t work.

There have been a rather large number of studies showing that tracking your eating in a food diary helps people lose weight. You don’t even have to track calories if you don’t want to, the mere act of keeping track of what you’re eating forces you to make healthier food choices. The assumption is that when you have to keep track of your food you will make better choices about what you’re eating. A 2008 study, for example, [showed that keeping a food diary will double weight loss.]

I very quickly learned that that was not the case at all.

Every day I did two things: tracked everything I ate, and logged my weight and body fat percentage every day.

I need to clarify two things in there:

First, the reason I logged my weight every day is because I assumed my weight would not change very much, if at all, so having a marker every day would help me see if there was a trend. You really should not do this if you aren’t prepared to see your weight fluctuate by up to several pounds a day. (It’s due to hydration and food intake, not actually gaining or losing weight.) You’ll freak out if it’s high for a few days and be tempted to celebrate with more food if it looks like you ‘lost’ several pounds since the day before.

Second, I measured body fat percent with one of these electronic scales. The method that these use to measure body-fat is not very accurate but it’s possible they could help show a trend. This will hopefully help illustrate that I’m losing a greater percentage of fat than I am of lean body mass. 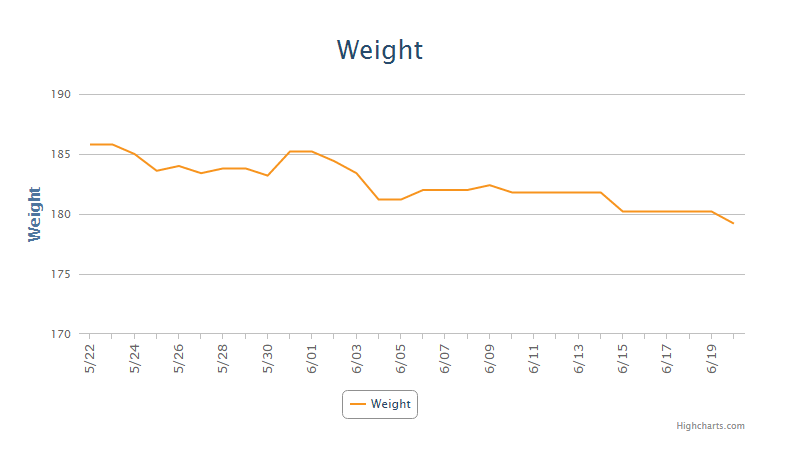 Even taking into account regular weight fluctuations, at a minimum I lost 3-4 pounds. Keep in mind this is after several months of ‘trying’ without losing anything, and somewhere between 3 and 7 pounds in a month is a decent amount of weight to lose for someone of my size.

More valuable to me than just the weight coming off was what I learned from doing this.

Here’s What I Learned

I was grossly over- or under-estimating the calories in my food.

Some meals or snacks that I thought weren’t too bad, like cheese and salami, turned out to be quite a bit higher in calories than I thought. I mean, I knew there was a decent amount of calories in cheese but I didn’t realize there were 120 calories per ounce.

In the opposite direction, the side of veggies that I usually have with dinner had even fewer calories than I thought. Riced cauliflower, which I’ve grown partial to as a ‘rice’ replacement, has only ~120 calories per pound. Coincidentally, that’s the same number of calories that are in the tablespoon of oil or butter that I cook it in.

You may have seen these comparisons online before, pictures of what the same number of calories look like in different foods, but it doesn’t really sink in until you pay attention to them for quite a bit longer than the time it takes to read about it.

It was only difficult at first

At the beginning of the month it was somewhat difficult. At the end of every day I was still feeling hungry; I really just wanted to sit down and eat a huge dessert.

But no matter how big the dessert was I’d still be hungry. And interestingly, even going to bed hungry I wouldn’t wake up hungry at all. I usually wouldn’t feel hungry again until noon.

Clearly my body just wanted me to eat more for no real reason. I got through it either by snacking on veggies or by having a small dessert and sucking it up.

After 2 weeks or so, that feeling mostly went away. Either I got used to it or I adjusted to the calories, either way it wasn’t nearly as difficult.

This is a lot easier if you use something like MyFitnessPal. Their food diary is built for this, and you can fairly easily just look up the nutrition info for something you’re eating inside of the tool.

Setting up an account on MyFitnessPal will help you figure out what your caloric needs for each day are. Just go through their short questionnaire, tell it if you’re trying to lose, gain, or maintain your weight, and it’ll estimate how many calories a day you should be eating.

This is monumentally easier and more useful than writing it down in a notebook. I bet it’d take 10x longer if you wanted to track how many calories you were eating by hand.

The longer you wait after you eat the less likely it is you’ll actually write it down. Truthfully I sometimes took to even logging my food before I ate it. That way I knew what I was getting into.

The several days in the past month where I didn’t log what I ate were caused by this. I got distracted and didn’t take the time to log it while I was eating, so I slipped up.

It happens, just keep going starting with your next meal.

If you’re not exact, overestimate

There will come a time when you don’t know exactly how much stuff you just ate. Was that one cup of rice or one and a half? How much butter did I use for my eggs?

The best way to log that is to be perfect. Weigh all your food using your kitchen scale and log it down to the gram.

The second best way is to do it occasionally, and use that to estimate all the other times. Use the scale to calibrate your food estimating superpower.

But since you aren’t going to be perfect no matter which way you go, overestimate. Round up your estimates a little bit to give yourself some extra leeway.

[Note that if you are trying to gain weight, obviously you should do the opposite. Underestimate a little bit in your estimates.]

There is not a lot of harm in missing your eating goals for the day, so long as you aren’t doing it every day.

Some days I went over my calorie goal by a couple hundred, but most days I was comfortably under.

At the end of my 30 days I decided that I’d do a different trial. For the next 30 days I’m going back to not keeping a food diary.

I’m curious to see if I’ll continue losing weight without actually tracking all of my food. My theory is that I will lose some, but maybe not as much as I did during the trial. I am hoping that the things I learned about my eating and the habits I started to form over the past month will help me stay on track.

What made me hopeful that that is actually true and not wishful thinking was a recent trip to Vegas.

Last weekend, just before my food diary trial ended, my girlfriend and I went to Vegas. Since we understand math enough to not bother gambling, we went to enjoy the shows and the food, so to better enjoy the short vacation I decided not to log any of my food for those days. I can enjoy a steak more if I ignore the fact that it’s 1000 calories.

That decision was a little risky. I’m prone to binge eating so it could have gone horribly with the fancy Vegas buffets, but it didn’t. Compared to my past habits, I felt much more satisfied with less food. I ate as much as I wanted, but it wasn’t more food than I needed.

The day after we came back was the end of my 30 days, and I hit the lowest weight of the trial.

So now I’m going to see if I can keep up the weight loss without tracking everything. The only thing I’ll track is my weight, so I can have some marker for progress.

If I lose about the same amount of weight again, putting me down to somewhere in the 174-176 range, I’ll call it a success, otherwise I’ll go back to tracking everything.

I’ll touch back here next month to update how it went.