Think of a fictional character that you admire. It could be from a movie, a book, or maybe your favorite video game.

Pick a character that brings you joy. Someone who is entertaining to watch and read about. This character should have a life that is a great story, since that’s what the movie/book/game is about.

Most importantly pick a role model, someone who you want to emulate. Someone who is happy, successful, and a good person.

Got someone in mind?

Now here’s my question to you. If that person was in your shoes, with all of their character traits intact but with all of your knowledge, experience, skills etc., what would they do?

Of course not, that’s why you admire them in the first place.

The image you’ve created of this fictional character wouldn’t do the same thing you’re doing. They would do something interesting, something epic. They would break out of the daily monotony and create a remarkable story.

They would embark on a training montage to be the best [warrior/athlete/chef/author/fashionista] in the world.

They would spend their free time honing their talents in order to defeat their enemies, whether that enemy is The Capital, Voldemort, or a Sith Lord. All of their energy dedicated to a single purpose, their ultimate victory.

What they certainly wouldn’t do is spend hours a day watching stories about other people, yet that’s what Americans do. According to the American Bureau of Labor Statistics, this chart below is the breakdown of time people spent enjoying leisure activities.

[Note that this leisure activities split was determined via a survey and interviews, so I expect that the ‘Watching TV’ and ‘Playing Games’ times are an underestimate of reality. I’ve seen other sources estimate as high as 4-5 hours of TV a day per American.] 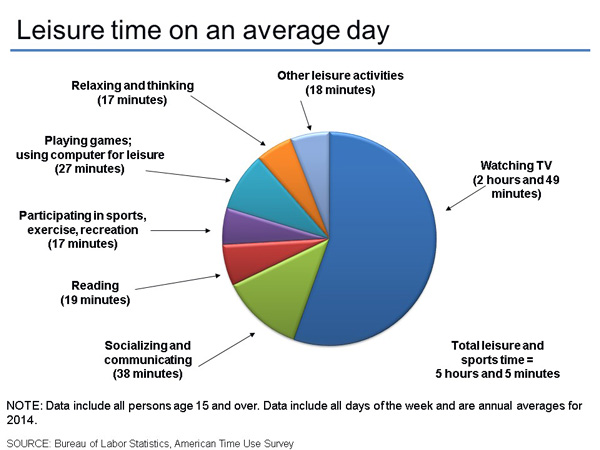 I mean honestly, can you imagine your favorite character sitting down and wasting their precious time like you do? I highly doubt you’ve read or watched a story about them doing so.

That free time is time that they could spend doing something.

We waste all of this time living in fictional worlds that we don’t take the time to improve our own lives, and that’s the ultimate problem I want to address with this exercise. Let’s use these fictional role models to combat the issue that they in part create.

That feeling you get when you’re watching TV but you know that you should be doing something useful is called akrasia.

Akrasia is ‘the state of acting against your better judgment.’ It is sometimes described as the lack of self-control. And it’s more than just procrastination.

It’s there every time you eat one more cookie, or procrastinate on a big project. It’s the hesitation you feel when you’re doing something you know is bad but you do it anyways.

Once you learn to recognize when you are behaving akratically, you can learn to…well…stop. You can do that with your limited willpower, or you can cheat and do it by changing your perspective.

“True character is revealed in the choices a human being makes under pressure – the greater the pressure, the deeper the revelation, the truer the choice to the character’s essential nature.”
― Robert McKee, Story: Style, Structure, Substance, and the Principles of Screenwriting

That quote is from a book on story creation. It’s advice to writers on how to create great characters that their audiences will appreciate and connect with.

But doesn’t it make sense for real life advice too?

There’s a lot to take away from fictional characters that can be beneficial in real life, and you certainly don’t have to read books on story creation or the hero’s journey to apply it.

Characters are simplistic, two-dimensional representations of reality. They have a small number of defining characteristics that they embody or seek to embody over the course of their story arc. While a simplistic character can sometimes be too simple for the purposes of a story, for our purposes that can actually be a good thing.

Now ask yourself this: If your role model character was in your shoes, right now, what would they do differently?

Often I find that it’s easier to think of what someone else would do than to think about the situation directly. Mental models of other people are simpler than reality, so analyzing complex situations through their lens can make those difficult decisions easy.

Over time, you should try to replace this mental model individual with Future You, your mental model of yourself in the future. If you already have a clearly defined model of the Future You that you want to be, use that instead.

Painting issues in this way can be useful for cutting through to the core of a decision. Your role models don’t quit when things get tough, they don’t compromise their virtues for personal gain, they don’t keep smoking when they know they should stop.

They simply do what needs to be done according to their values, simplistic as they are.

So the next time you’re pouring yourself another drink, or pulling out another cigarette, or procrastinating on a big project, consider this: What Would Batman Do? (WWBD?)

I’m fascinated by stories and their implications. Why people (myself included) prefer to escape into a story instead of staying put in their own life.

After all, the people you look up to in stories usually have no need to do that. Ever seen Luke Skywalker read a fiction book?

Why must we escape to new Galaxies, or fake histories, or real life other people instead of spending time in our own lives?

I’ve always thought it would be fun to have a ‘storybook’ style life. Everything is straightforward, there’s one ‘Big Bad’ to compete against and thus there is little ambiguity in the everyday decisions to be made.

Reality is obviously different. Usually there’s not a ‘Big Bad’ and the options are limitless. We’re in an open world world and there’s no limit to what we can do.

This website is supposed to be about that to some extent. Using science to engineer a remarkable life, an interesting life, a lifestyle chosen and designed because you want it.

The past few months I have been researching and writing about useful knowledge, mental models, and techniques for self-improvement. I’m attempting to slowly build a toolset for lifestyle design that anyone can use with some effort.

What’s missing is the story.

To that end I’m going to begin sharing my story. I’m not saying that I possess a remarkable story that should be emulated, quite the opposite really, but I don’t intend to talk much about the past.

What I intend to document is the story going forward. The story of using myself as a guinea pig for implementing this toolset of knowledge. I’ll publish my ‘N of 1’ experiments that I carry out on myself, and share the preparation and results of any adventures I may go on.

The biggest changes and greatest moments of my life have come from experimentation and adventure, and I plan to make some more memories.

Quite possibly, this will be a story with a lot of failures. But that’s ok. The only people who have never failed have never tried.